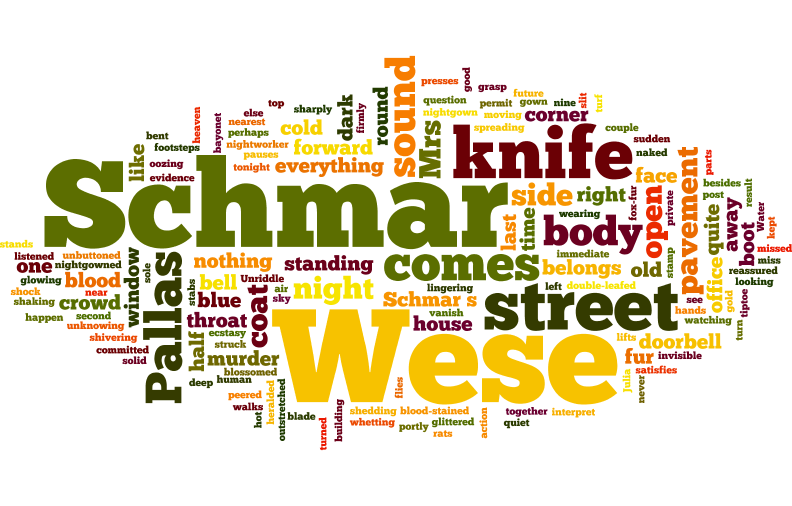 While Final Cut and Photoshop are two programs I have worked with for a few years, online Flash based applications are something I have not explored, in the realm of education or otherwise (aside from some gaming). I am very excited to with the prospects of enlivening my Short Story Unit with Grade 11’s with technology-based texts. There is the less innovative version of this type of literature, which is simply having an e-edition of a published work. I am more interested in the far out approaches that draw upon other disciplines, because I think part of the success of our students will rely on us teaching them to consider a world beyond basic binaries.

This article was created on Wordle, which is one of several word cloud generators based in Java script. It allows you to input as many or as few words as you like and create these literary, thought provoking pieces. The words that I used to create this particular word cloud are from a short story by Franz Kafka called “Fratricide” from 1917. How I will utilize this in my Short Story unit, it that I will present them with the word cloud and tell them they have a BLANK amount of time to use a particular amount of these words, in class, to create a short story. Depending on the literary devices, if any, I wish for them to practice or the overarching language I’d like to teach them with the unit, certain stipulations will be presented to the students, as the “rules” that they must abide by in their short writing, which I can later use to summative assess their papers with, along with giving them marks for effort.

After they complete their stories and have handed them in, I will reveal the short story from which the word cloud came from and we will read it, noting how different the words are used in the source story, compared to their own. I think this will invest the students in an older, possibly more difficult to relate to story, focusing on language, both its evolution and its standardization.

BACK IN THE DAY – A HISTORICAL REMIX

I will be teaching a Media Course to the Grade 9’s and was intrigued by one of the sessions we had in the Ponderosa about teaching students to critical of the media, by presenting altered images to show how easy it was to manipulate the “truth”. For my artifact, I took the lives of Jay Z and Beyoncé and retold the story as a classic fairytale. The story is completely make-believe, yet with the images supported by text, it is plausible. There is a hint that the story is fictitious, in that the entire story is told through rhyming couplets. I would like to show my students how easy it is to remake stories in media. From this artifact, I hope to spawn conversation about why history and news is remixed in the media, as well as give students the opportunity to make their own remixes of media. I would scaffold my own example, with other examples of remixes, such as The Bigfoot Hoax, as well as the JFK assassination footage, to show different aspects of media and historical manipulation. I have observed other media classes and have noticed that the focus is to simply talk and discuss the content of media, rather than the more important and useful practically applicable skill, to discover how it is created, who is it created by, and what is it’s purpose. I want to give students the opportunity to question all texts and images they encounter, include the news, which many of them may believe are infallible. There is also the opportunity, if I am granted it, of teaching some basic skills in Photoshop. A large part of my pedagogical approach to teaching is not simply slinging content at my students, but providing them with practical skills for use outside of school and harboring a sense of wonder that extends beyond the traditional means of which, I have observed, they are continuously bombarded with.

A VISUAL POEM ON CHANGE

For this artifact, I wrote a poem, recorded it and added video with it that I created in Final Cut Pro. I will present it to my Grade 9s as part of the poetry unit, in the lesson on visual poetry. I want to present contemporary poetry, based in mediums students actually come into contact with, such as film and social media. To present both the traditional on paper poem, as well as poetry in new, kinetic forms, gives students a generous selection of poems that they may engage with. As an educator, we cannot force feed our students canonical texts and expect them to appreciate them. As part of my pedagogy, I wish to present as many different ways that poetry can exist, why it exists and give them a chance to create it themselves, through these different approaches. This addresses the different types of learners and how they both intake and appreciate information. I could also provide a basic tutorial on Final Cut Pro, providing the students with an additional practical tool or a taste of something to investigate, if they are intrigued.

I realized while creating this visual poem, how much work goes into creating such a great scaffolding tool. Yet the creation of such a teaching tool means that I will have it in my portfolio for future use. With this visual poem, as well as my other artifacts, I also realized the importance of creating my own examples, as it shows students that they too can create “brilliant” texts and art.