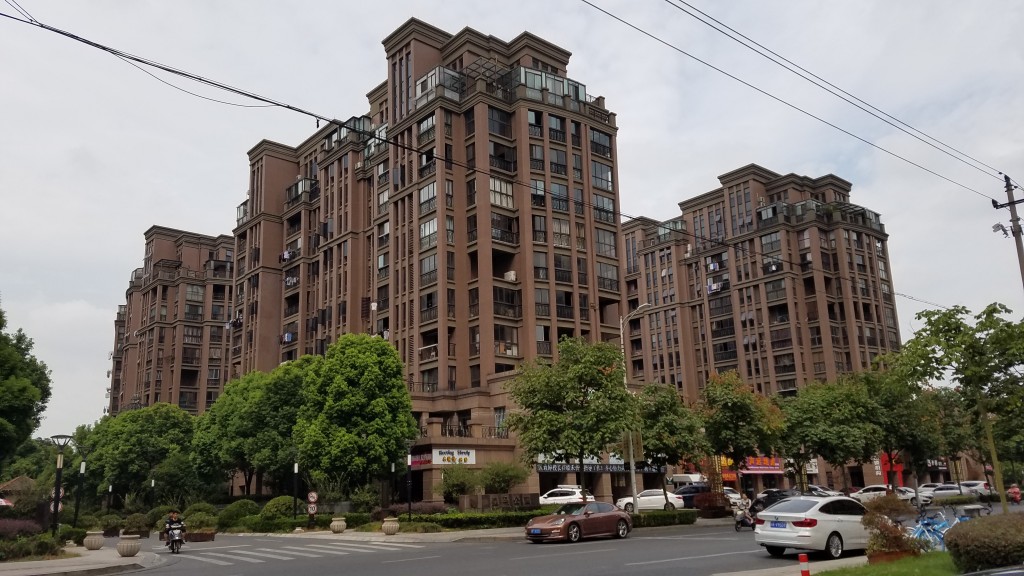 So this is what day number three feels like alone in another country, without a person or two wheel companion to share the experience with?

Wow. That sounded quite disheartening. And that’s not how I feel. I feel…okay. I see possibilities. In teaching. In an overgrown garden that needs tending and care. In a life that needs foundations cemented deep into Jiaxing’s soil for a year.

My school is wonderful thus far. I was picked up from the airport by the principal and a co-worker and driven the hour and a half from Shanghai to Jiaxing in the dead of night skies with no stars, guided by yellow street lights and straddled by gray buildings, trees and expanses of black. We arrived at my complex at 12am. My principal shows me the basics of my place. Here is the air conditioner controller for this room. Here is the air conditioner controller for that room. Here are some bananas. Here are the three TVs in your place, two of which sit beside each other, one flat screened and one an old tuber, like a father/son talk or an awkward visit to the old folks home where you are left to for an hour to have a conversation with your hard of hearing elderly relative. They look uncomfortable on the same shelf and I am uncomfortable with them both being them being there, because of the inutility of the older generation model and how much space it occupies. But, I shall not be bothered with that now. I fall into a sleep of sorts. 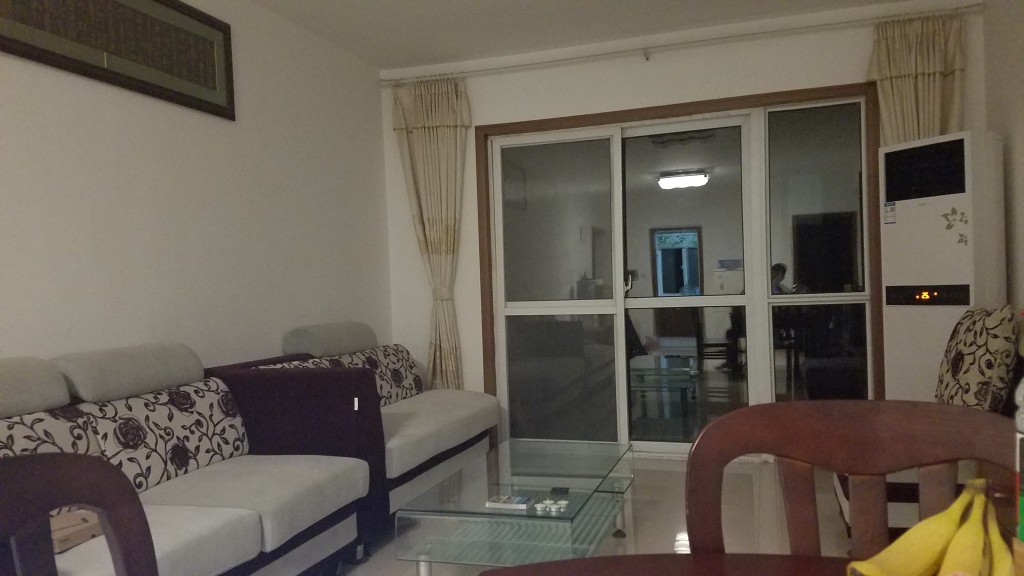 my pad for the next year.

The sleep was not great. Jetlag is a newborn infant. You wake up every ten minutes or so. The sounds of a new place are unfamiliar and thus are whispering cruel things to me. The next day, I shower, eat one of the aforementioned bananas in cereal in a too small bowl that I will have to remember later on, and meet my principal outside to head to the school. I am ready. I am sleepless, but I am ready. She and several students show me the school. They show me the mediocre bathrooms (students words, not mine), the classrooms, the offices. The most exciting parts of the tour are self-revolving. MY DESK! MY CLASSROOM! The tour finishes and the principal returns to her office. My classroom is being used as a study hall. I sneak in and start to put up posters. But how can I sneak in? I am a Caucasian person in China. We cannot sneak anywhere. My students watch my every move. I am sleepless, but I am ready and I am choosing posters. I have too many for the space. Too many for a concert hall let alone a classroom. I will rotate them throughout the year. I have Goliath plans. I am dreaming and floating in a red sea of China. My name is spelled in pushpins on a green, felt board at the back of the classroom. Mr. Cooper. I am not Mr. Cooper. I speak with the principal. She okays it. I am Ira. I am Ira to everyone. There are no Mr. Coopers in my family. That generation was buried in 1994 with my grandfather in Toronto, Ontario. I am Ira. 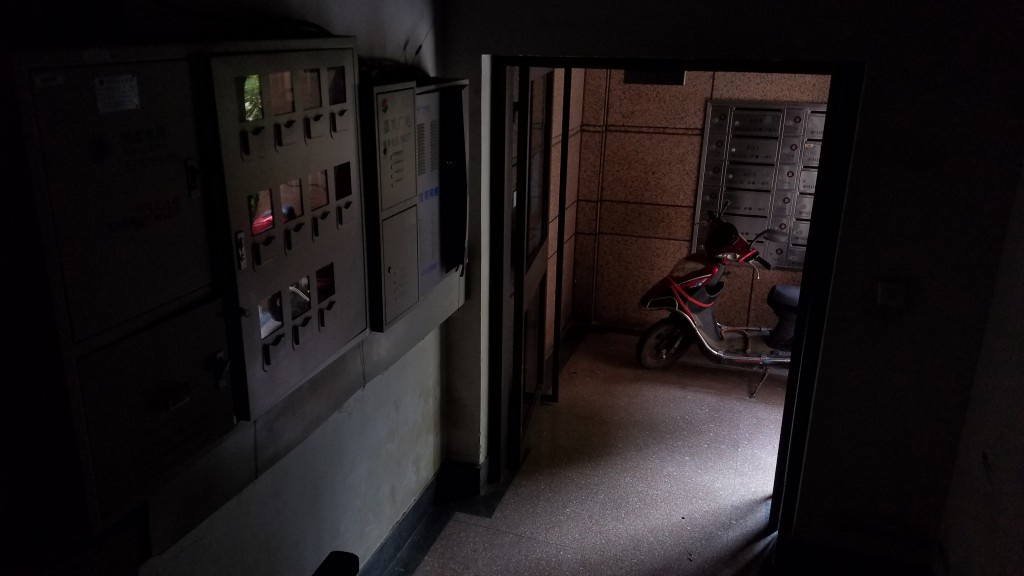 entrance to my pad.

The next couple days blaze by like the heat, heavy like the humid slog called air. I went to the nearby Decathlon, my first solo outing. I take a moment now to note that the lack of tense uniformity us due to the lack of it in my life currently. I am everywhere like a suped up Delorian. This is not a good time to interrupt with that sidebar. We were talking about Decathlon. Decathlon is an amazing sports store from Europe. I am wowed by their selection of camping gear. I have previously purchased a tent at one of these stores, in Beijing, in fact. It met a fate of cat claws and piss. I will purchase another one. Quelcha is an amazing French brand that makes these great two person tents that fools like me needn’t worry going out of their comfort zones to put up. I used it throughout my Europe bike trip. I will use it again, but this time, my plans involve some local bikepacking. I am giddy with the long haul options and the untranslatable unknown. 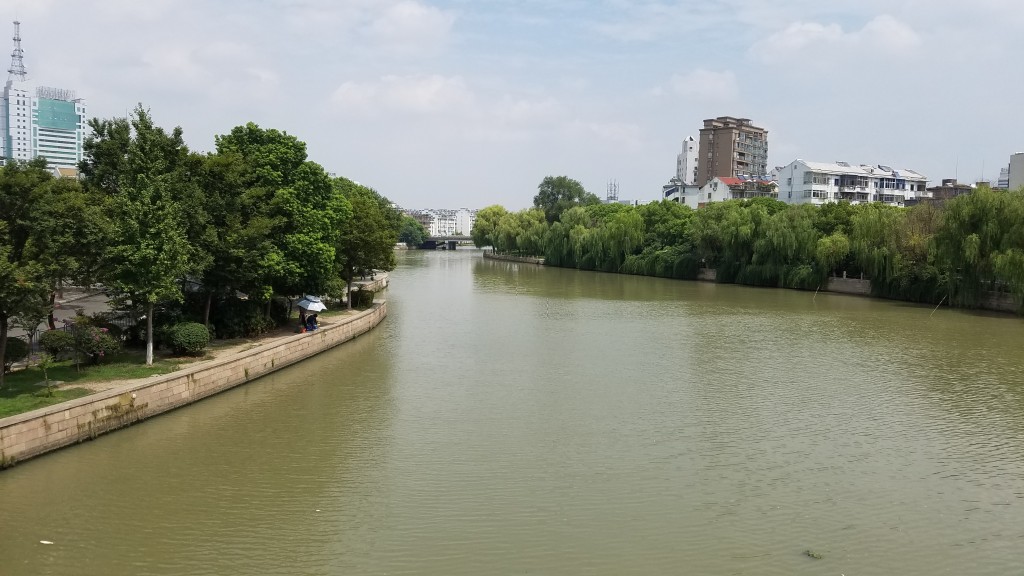 one of the many canals in Jiaxing.

I eat a meal with the principal and a few teachers. Muslim food. I love Muslim Chinese food. It, like many other dishes, cannot be found in North America, except for a few, in the know, places. I nosh on noodles and potatoes and dumplings. There are more dumplings and buns to eat. My mouth unabashedly waterfalls at the thought of more.

I am on the hunt for a bike. Another teacher takes me to several outlets to check out what is available and at what price. I borrow a city bike and love every minute of the insanity of directionless cars, and tuktuks, and electric bikes, and stares and putrid canals and sounds and honks. The city bike is way too small for me and is rickity like the surrounding architecture. I will make my decision tonight as to where I shall purchase said two wheeler (as of two nights later, I am still undecided). 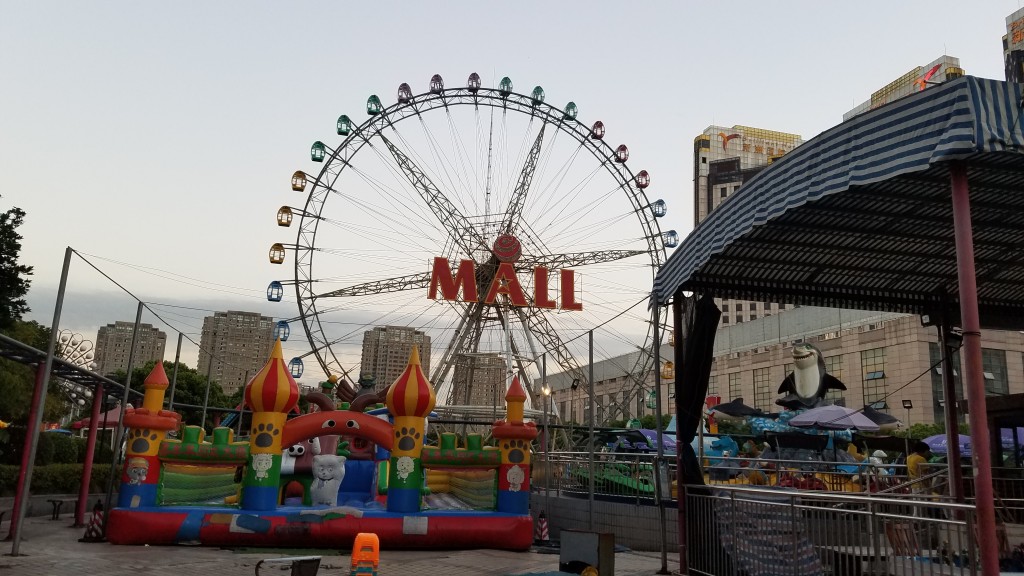 Just in case you were unaware of where you were, which you might.

That night, the teachers and principal went for a dinner at the mall. The mall is a strange and marvelous place of the gaudy and decrepit. A strange amusement park that screams R.L. Stein sits in the centre of the mall’s open forum. It includes a Ferris wheel, several roller coasters and a random, broke down prop plane. If you have a penchant for trusting shotty mechanics, I suggest you take a ride. I happen to be quite a fan of this little ditty called life, so I passed. Oh, I most definitely passed on the basement aquarium, complete with suicidal dolphins. 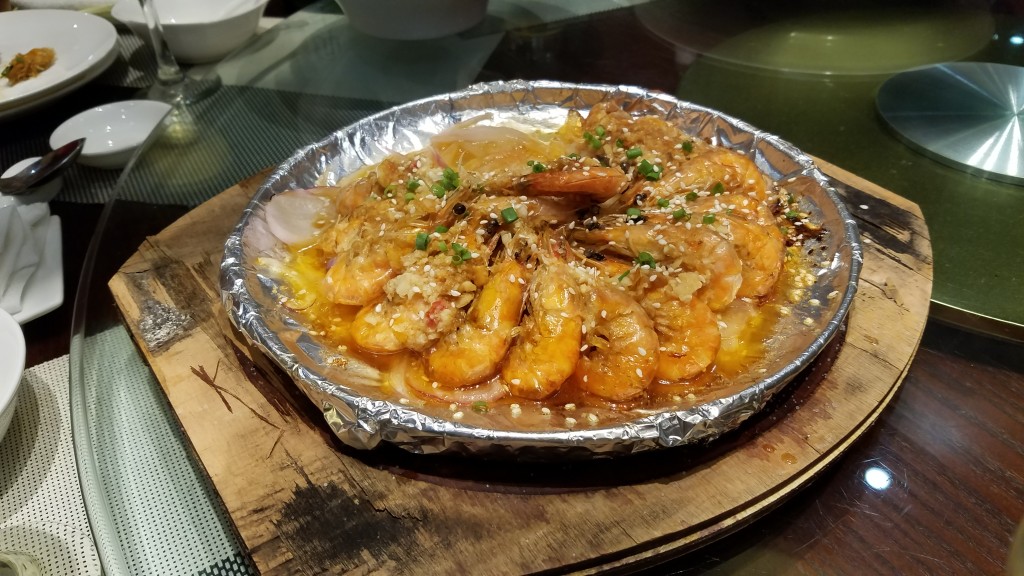 Teachers’ dinner. One of many amazing dishes.

The dinner was epic, fine dining. Shrimp and dumplings and fungus and salad and pork belly. OOOOOOOOH YEEEAH.

Next day was a wandering day. I headed to a used bike store I had heard about from my co-worker. It was an hour walk, but I decided it would be a good way to see the city. So I hoofed it and found the following things: 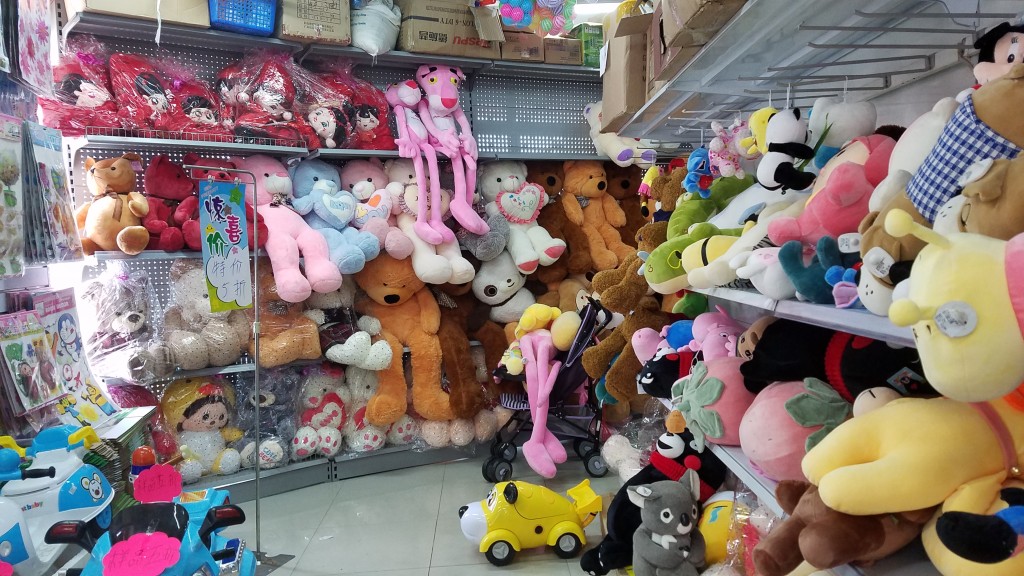 Walmart – I bought oatmeal and tiramisu Oreo. I have yet to try to Oreos. I feel they will disappointment, as were most side-bar ventures of Oreo in Central America. 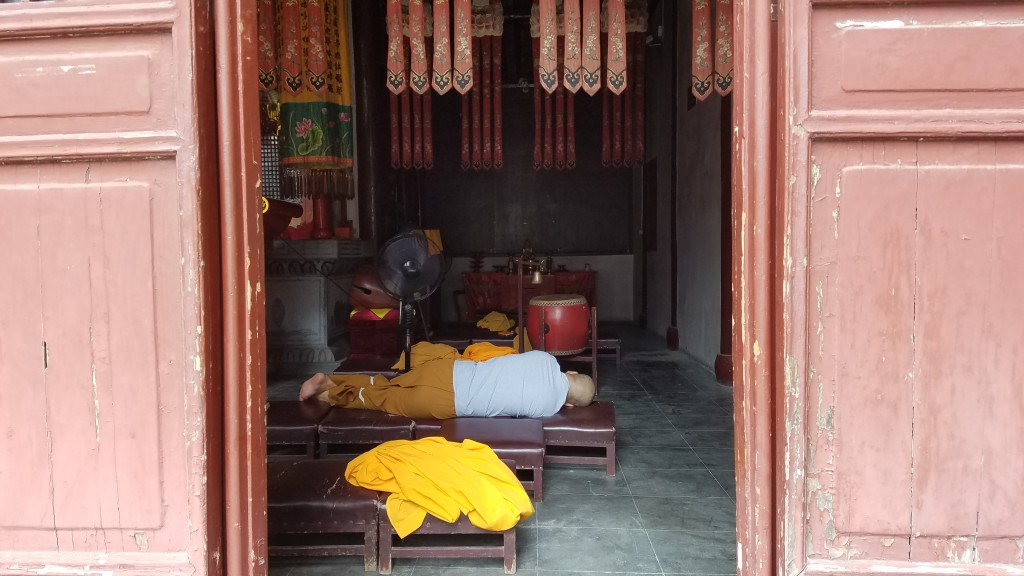 A pork bun outlet – I consumed a pork and veggie bun. Yum.

The used bike store was pretty good, though ridiculously hard to find. A random room in an indistinct cinderblocked, crumbling factory. The bicycles made the room distinguishable from a place that one makes a mistake coming to and is promptly murdered or kidnapped for their erroneous decision.

Tonight, a colleague of mine will take me to Moon River, the central hub of tourism and alcoholism in Jiaxing. It should be a once in a life time experience, translating to a probably “been there, done that” evening. But YOLO, right kids? 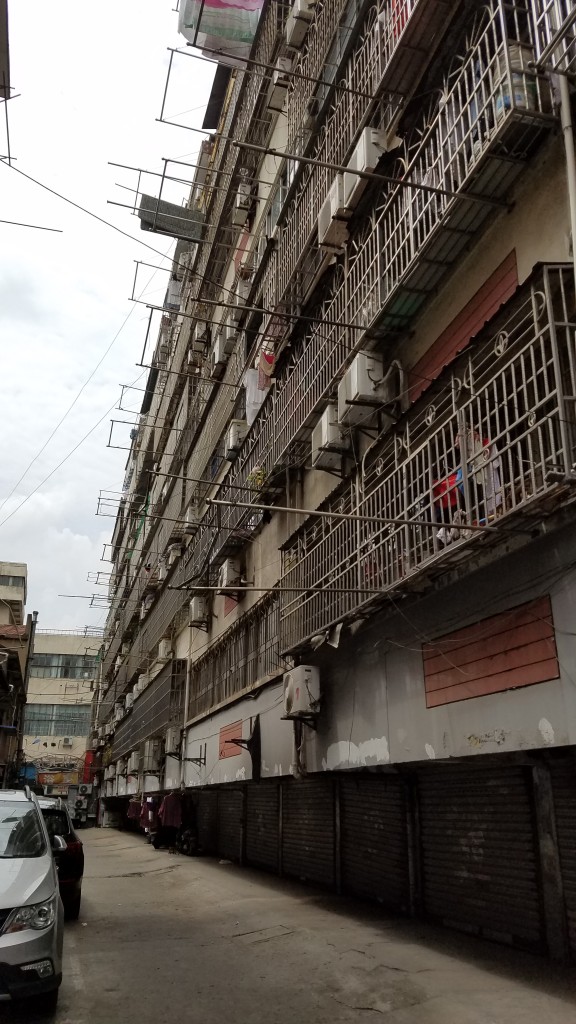 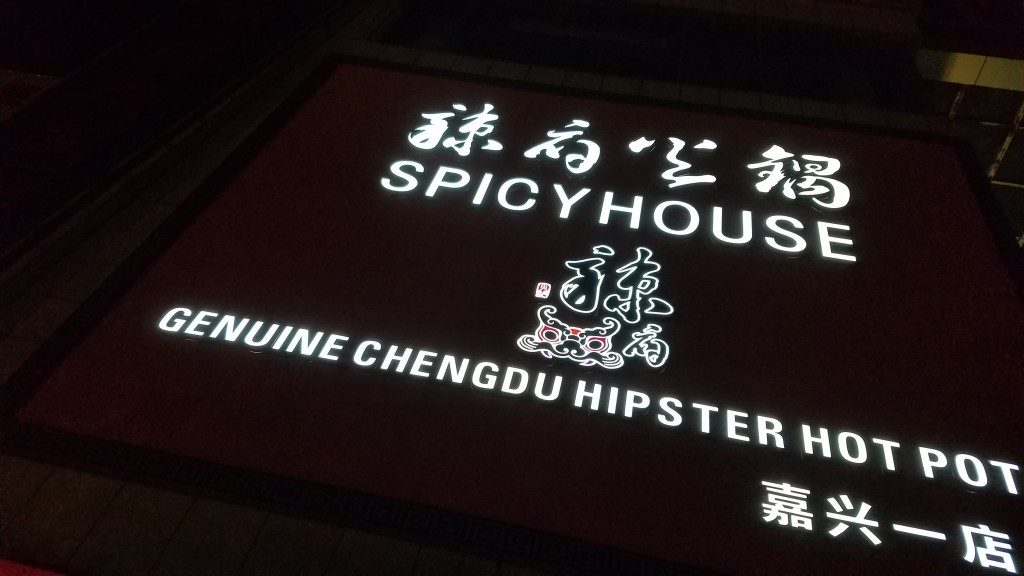