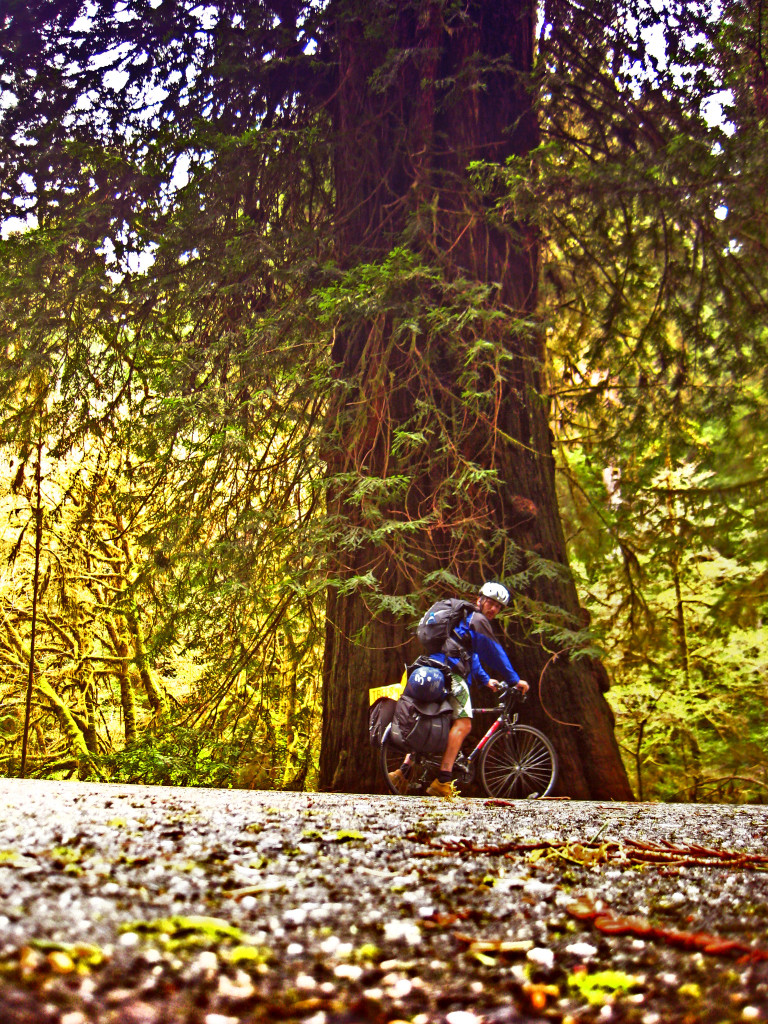 In 2010 I went on my first tour without an iota of bike fixing no how. Basically my understanding of bicycles was, you pedal, they move forward, you brake, they usually stop. I left home with a single multi tool that I had never used before, a set of allen keys and a portable plastic pump. I don’t even think I brought extra tube with me. I am sure I didn’t have any extra spokes. This would all seem like red alerts for future me of a bad situation festering and plotting, but past me, was oblivious to bike failure or it’s maintenance to avoid it. 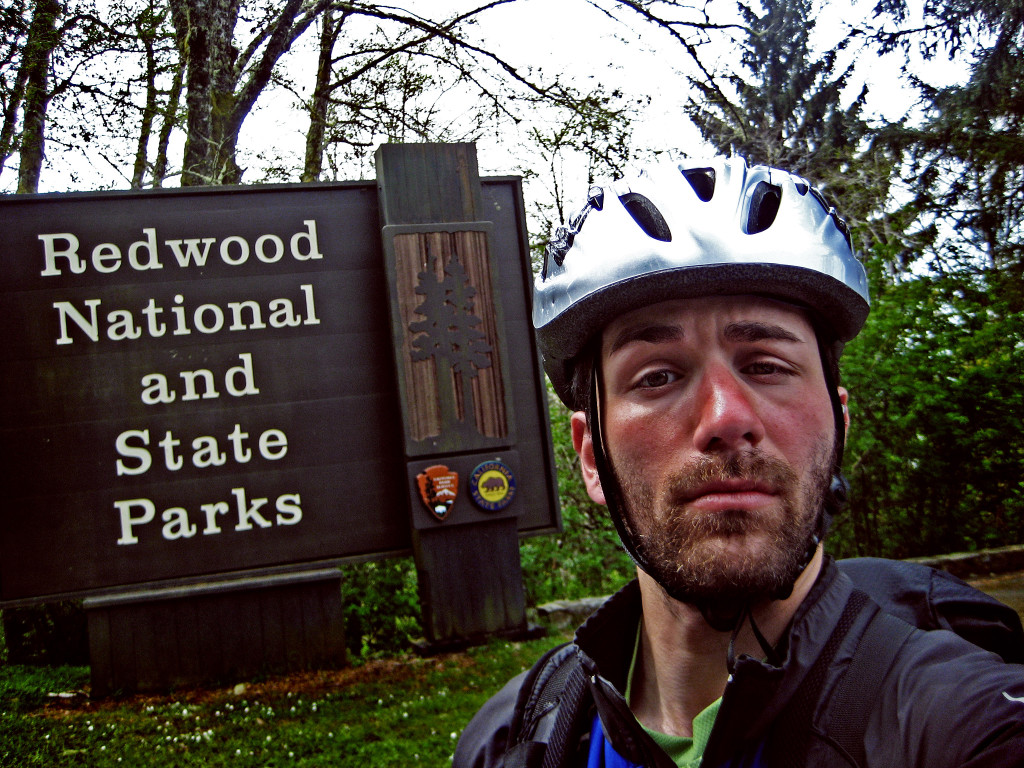 And nature and the odds pitied me all the way to California. I had travelled hundreds of miles down the coast without a single issue with my bicycle. I had picked up the concept of bike chain lubing somewhere on the side of the road in Washington, so even the sound of my used jalopy was pristine. Nothing was out of line, the wheel was straight, and the brakes weren’t rubbing. From a current perspective, this possibly was the all too calmness before the storm, the sitting in your home, asleep, unaware that the heavens were black and swelling with conspiratorial storms in the works. 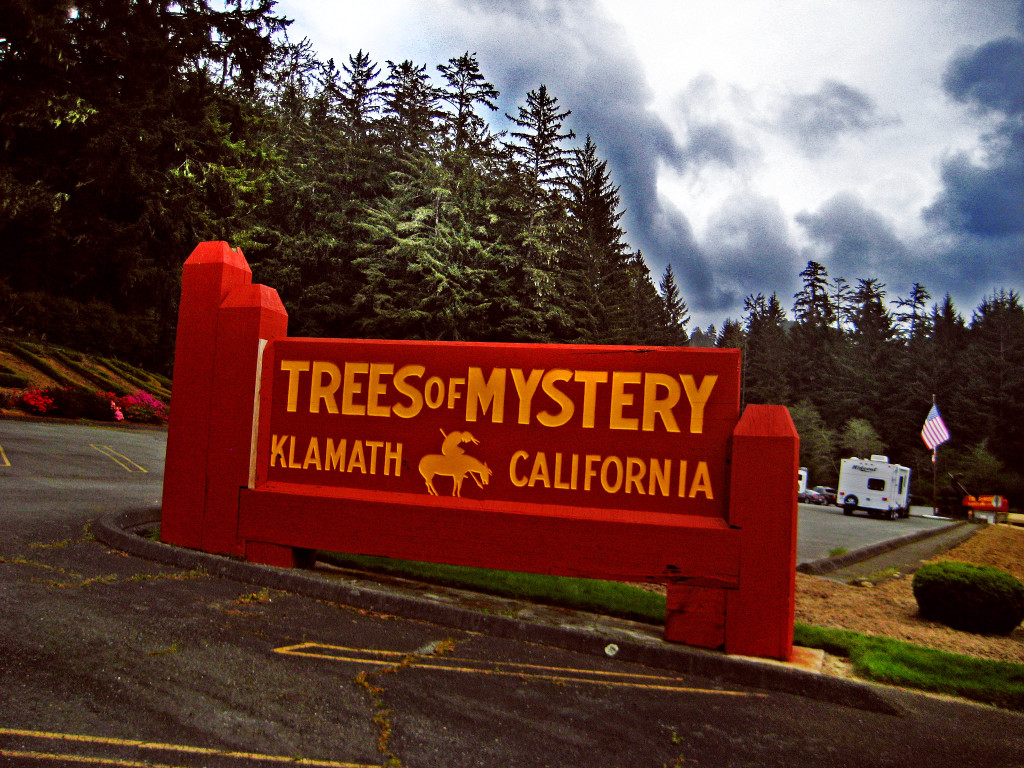 Then, in Klamath, California, under the awning of ancient, thick sequoia trees, the timer stopped unexpectantly. I was staying at a motel across from the large statue of Paul Bunyan and his Blue Bull that stood in the parking lot of the Trees of Mysteries, part theme park, part museum, part schlocky tourist trap. The motel had a restaurant attached to it. I was sole patron, made to look even more depressing, as I was drinking beer, with the accompanying meal being the sampler appetizers combo, which consisted of a lot of yellow fried things that are usually shared between 12 likeminded, intoxicated individuals.  Blech times 12. The taxidermy duck legs that hung down from the faux water ceiling and the stuffed bear at the entrance, which were features highlighted by dead fly filled florescents, encouraged me to pay my bill and seek food elsewhere. Back in my room I removed my panniers from my bike, Klalita, and rode towards the “town” nearby, which reportedly had a general store or mercantile of sorts. What I had forgotten to remove were the bungee chords that I used to secure my tent to my rack. They went unnoticed for about a kilometer in and a half, when all of a sudden, around 6:30pm or so, one of them twisted around the back cassette, tearing my chain in half. 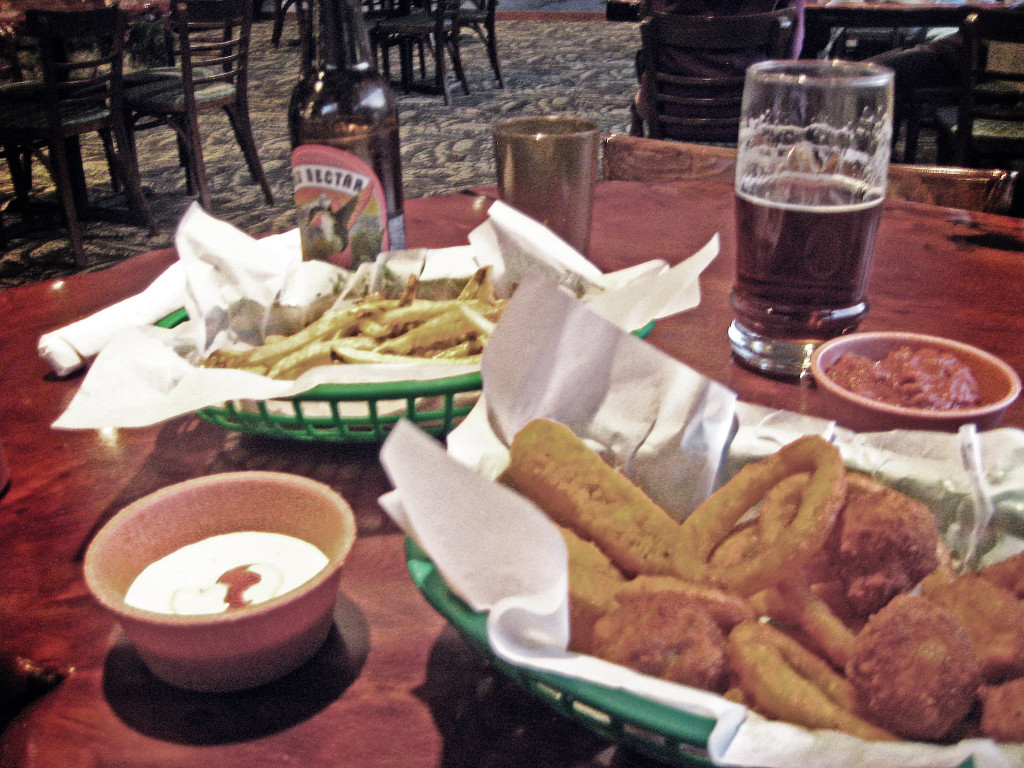 This was my first thought. As I carried my bicycle back from whence I came, I attempted to work out where I could catch a bus, with all my gear and bike, back to Canada. This minor atrocity, at the time, seemed like the destruction of my entire world. Yet, as I entered my room, staring at myself in the bathroom mirror, as I washed my hands off of bike grease, I realized that while it seemed as if I was in the middle of nowhere, I really wasn’t. I was in the US of A, which had a plethora of amenities that could salvage my bicycle and the trip it was on. I had passed MANY bike shops and cyclists, so finding one of those was an option. But then I remembered….I HAVE TOOLS! I have no idea what they do or if they can help me, but it was a worth a shot trying to figure them out. 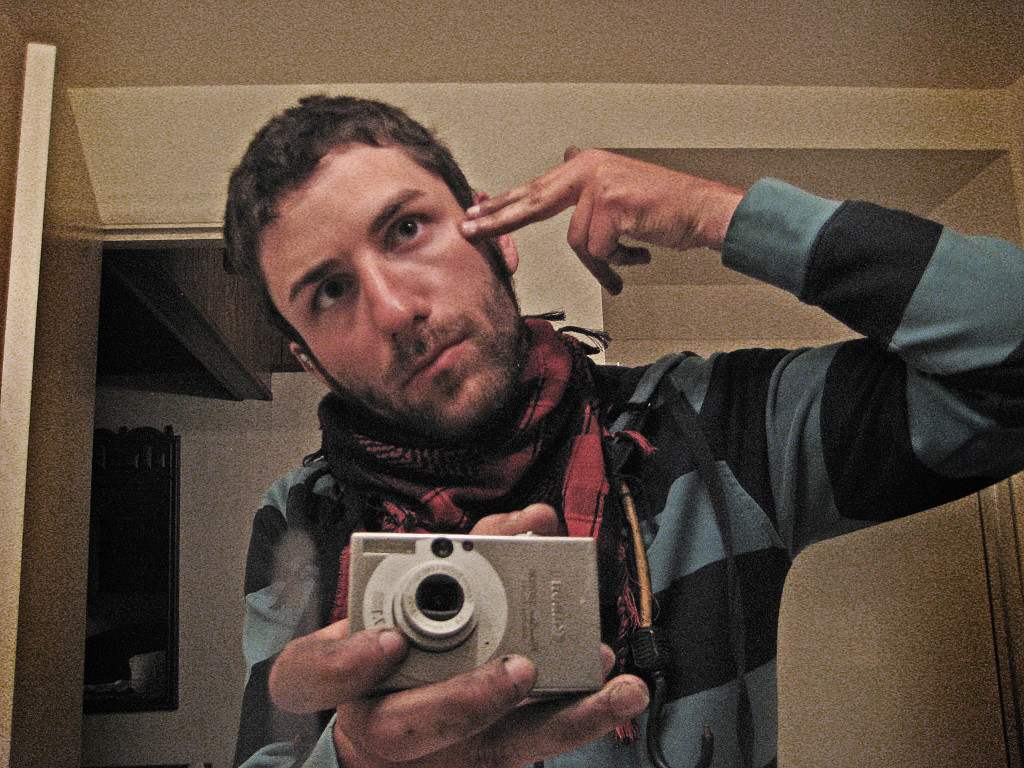 With a slow internet connection, I typed my bike issue into the Youtube search menu. 85 million results. 84 million of them were tutorials on how to fix a chain. I set to work, following the step by step guide. Though it took several hours for a job that would now take me ten to twenty minutes, the exhilaration of fixing my own bike was worth the struggle. I had discovered a new desire to know everything about bicycles, to be as self sufficient as possible on future tours, that I now knew I wanted to have. 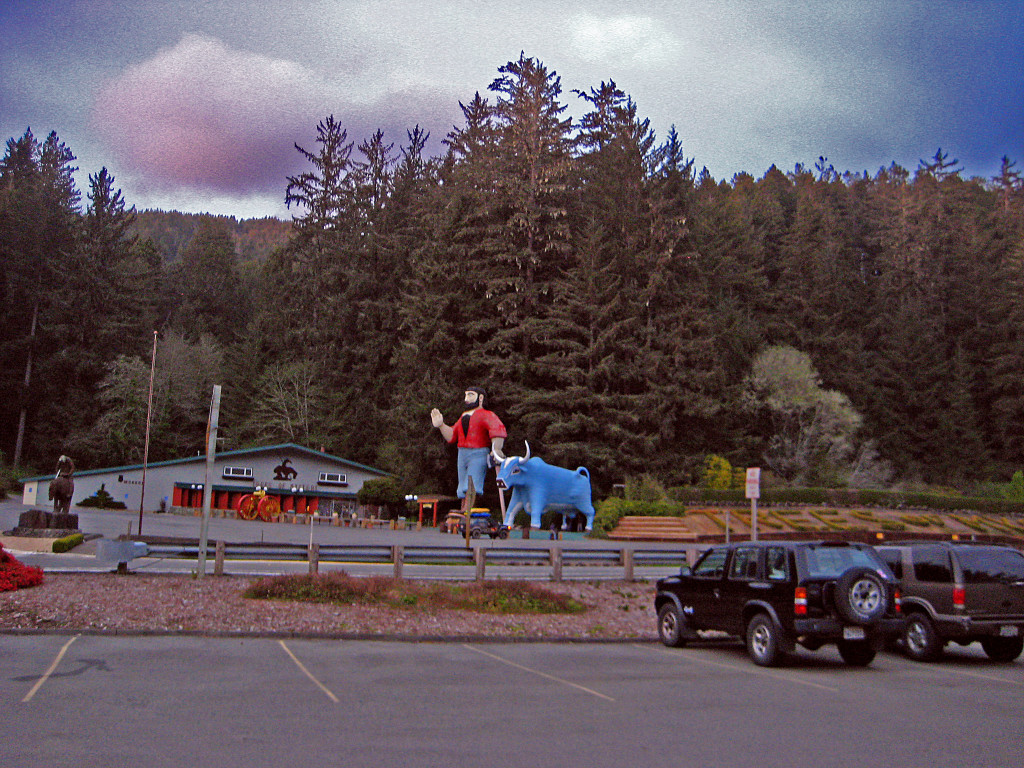 The view from across the hotel -Klamath, California.

The safety net of being in a country with a plethora of resources for cycle tourists and travelers of all levels made it an ideal first country to tour in and more importantly, make mistakes in. I recently saw on a forum a cyclist lambasting people for touring without knowing your bicycle inside and out. While I think, if I were to do this trip over again, I would have learned a few more key skills in regards to bike fixing, but I would also say that nothing really prepares you for fuck ups. And fuck ups themselves are great teachers, as well as put you in contact with great people, opening lovely dialogues about bicycles and beyond. I think it’s unfair to say YOU MUST KNOW EVERYTHING TO BICYCLE TOUR. That is elitism at it’s finest. I think a working knowledge of things can avoid problems down the line, but I also think that I would rather people get on their bicycles, then not get on their bicycles, because they feel they are not part of the “club”, own a crazy amount of lycra or are dissuaded to tour, because of their lack of bike know-how. I know several non-cyclist cycle tourers who know enough about bikes. The rest, they fill in along the way. And sometimes you just need to improvise. In the end, it will all work out and you’ll feel the exhilaration of coming to a solution, whether it is the tried and true way, or the wonderfully creative and makeshift approach. 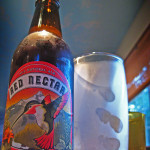 Me…at the most “awesomest” restaurant in the Redwoods… 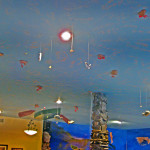 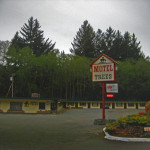 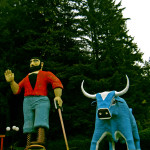 Paul Bunyon and his Blue Ox 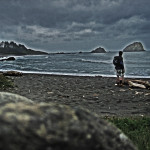 A beach in the Redwoods. Sidenote, I saw some people surfing in the rain here. Frigid temperatures OUTSIDE the water. 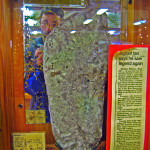 Part of the Trees of Mystery Museum, Bigfoot’s Foot.