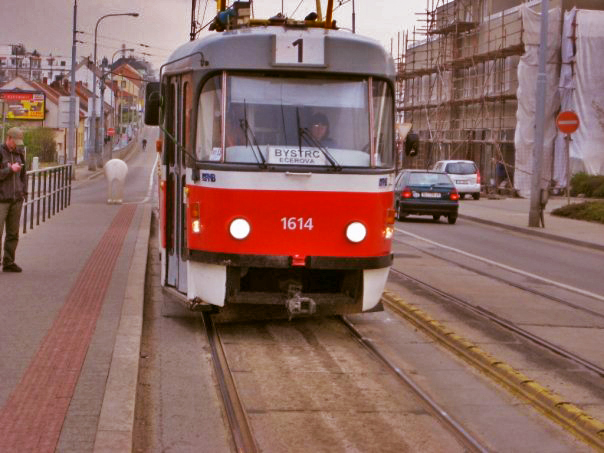 This is the story I have retold the most in my life. And for good reason. It kind of sounds made up, yet not really epic enough to be worth the time imagining it. Maybe I should let you, the fearless reader, decide whether or not it is a tale worth continually spinning.

In 2008, I traveled to the small medieval town of Brno, in the Czech Republic. Now, if you’ve never heard of Brno, you’re probably far from alone. It’s a university town, in the West. Why in anyone’s name would I decide to make Brno, non-descript Brno, my first destination ever to travel to in Europe. I had no part in the decision making process. I acted in a play and the play was recorded and submitted to a festival in Brno. So I was in Brno. There I was. Like a dog after a bath. I raced all over experiencing firsts. Monumental firsts! Such as riding a train for the first time. As passengers sat looking at mobile devices or gossip magazines or dozing off, drool and mushed fleshed smeared against the windows, the most beautiful, living landscape wooshed by, only replaced with more beautiful scenery. I was shocked. I had not the experience of doing a daily commute abroad, so could not comprehend how people were able to refrain from constantly staring out of the window at the natural masterpieces. The train felt like a revelation. The passengers felt like a Tuesday. 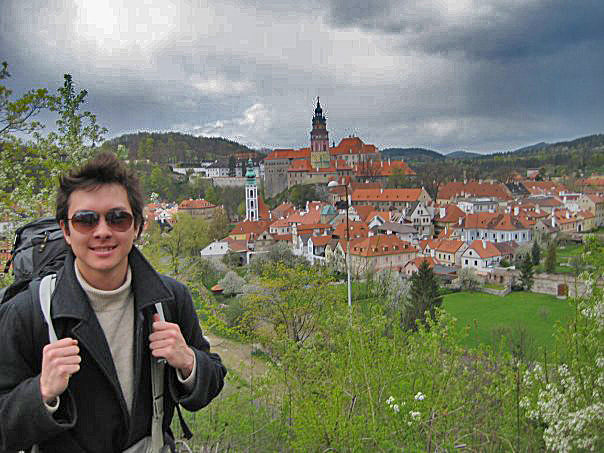 Adventures through Czech Lands – walking through the mountains around Czesky Krumlov.

The play ended and the options were endless. A friend and I traveled through the Czech lands, utilizing the infant couchsurfer project, finding amazing hosts throughout the country. An Irish dancer in Olomouc, a mechanic and his family living in a small town outside of Ceske Budejovice. We ended up in the capital. He left. I stayed. Stayed and taught English for four months. A contract ends and freedom once again is attained. I decide to explore my Jewish cultural heritage. Though I felt very little connection to my faith, I was interested in my history, interested in seeing the places where thousands and millions of my supposed extended family were imprisoned and slaughtered. There was other histories as well. And I was interested in them too. The stones of walls and cobbled streets narrated aloud. I travel along a zig zagging line across Eastern Europe on several chugging bullets. I see parts of Poland, the dark undertones of The Holocaust seep into every observable space. I continue on. I almost visit Belarus (a story), but end up in the Ukraine instead atop a tin roof, with one of the leading members of the Ukrainian Gay Rights Movement. We watched the sun ride over onion shaped domes and steeples. With Visa clutched tightly, I enter Russia. I spend time with family friends in Moscow and move onto to stay with a couchsurfer in the beautiful and ancient city of St. Petersburg. 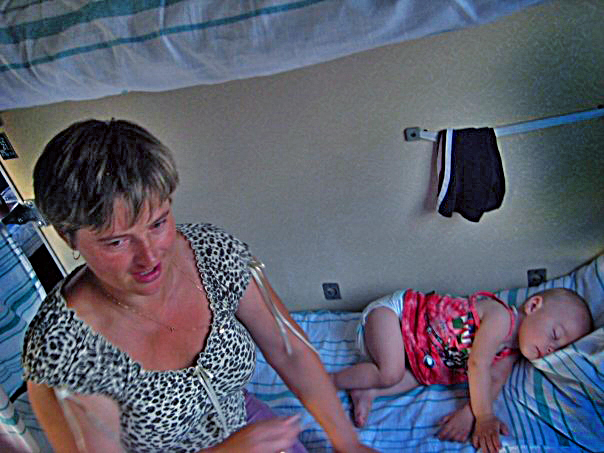 On the day my Visa expires I hug my couchsurfing host goodbye and board a bus heading to Estonia. The bus, once a thing of beauty, sturdy as a mechanized colt, now emitted the sounds of a starving stomach, a machine on its deathbed. It breaks down and takes an hour to fix. We reach the boarder in the pitch soot sky of the next day’s morning. We are all made to exit the bus and walk through passport inspection and security. I haven’t noticed the time yet. There are no clocks on the walls. I hand a guard my passport. He squints to make out the dates on my visa. We stand still as steles. The line no longer moves as the guard calls upon someone else, another guard, who I can only presume is his superior officer. Broken English leaks from his mouth in a monotone fashion:

“I am sorry. Your Visa is no longer. You cannot leave.”

I stand, backpack still strapped to me, sweat stained, knees knocking, body burning. I stand for two hours. I am finally allowed to take a seat in a waiting room that reminds me of my childhood pediatrician’s office. I can see into another office space, where a woman types away on an old typewriter. Maybe it was a computer, but I see it in my mind as a typewriter, so that’s what it shall be. I have already pleaded in English to any passerby, telling them my tale of an unlucky experience with a rickety bus. The faces whizz by, not all too concerned with my gibberish, my babbling. I whip out my electronic translator and attempt to make a sentence. I think I am saying:

“My grandmother was kicked out of Russia one hundred years ago and now you are imprisoning me in it. Please, please let me go.”

Could anyone understand my butchering of the Mother tongue? At first, no. People went about their menial tasks like good Communist worker ants. Then I see the woman at the typewriter through the door. The old typewriter has stopped clanging. She is frozen in a still frame. She wears a pastel dress that looks very itchy. She is a still frame except for the tears streaming down her reddened cheeks. Yet there is nothing she can do, so she breaks from the trance and continues to type. I feel her. There is nothing that I can do either.

An officer approaches me and explains my crimes once more. I am frustrated and tired and really don’t need another explanation. The officer tells me I will be boarding a bus.

That is the last place I wished to go now. And yet, that was what was happening. My frustrations no longer could be contained. Be damned with the consequences of voicing my objections to the regime stoolies. What could they do? Throw me in jail?….Yes! But if I get caught wandering the streets of Saint P without a legit visa, I’ll be in the same spot. I air this concern with them. It gives them a good chuckle. I yell. I curse. I am now sitting on a tourist bus. A tourist bus heading to Saint P. It drops me off in a part of the large city that I don’t know. Think Ira. What are you going to do? I find the subway system and descend into the arterial tubes bellow the city. Somehow, I remember the directions to my couchsurfer’s home. It’s 4:30 in the morning. I don’t wish to disturb her, but my options are limited.

I pensively knock. There is an audible stir from within. The door creaks ajar and she stands there, hand behind her head, stretching, scratching.

I unfolded my blanketed story. My former host stands there, looking lost, eyes mostly closed, body rocking. Yet her pause was one of consideration. Her solution was swift and to the point:

“No but. Offices aren’t open yet. Only thing open is Port.”

I couldn’t argue. Port, port and more port. A call to the Canadian embassy provided no answers, but asked if I found some later to pass them on to this fine governing body, so that they can take credit from what I have learned from this plain shit-storm experience. Thank you tax dollars. As useless as national pride.

I bought a new train ticket and did a bit of snooping around for information on what my next move would be. Rumor has it that there is a phone somewhere in the St. Pete’s airport that you can call and contact a guy who you can bribe to leave the country. It was worth a shot. After six hours of searching the airport for the Where’s Waldo Phone and having some of the best damn sushi I had ever had (which threw me off, as the sushi maker was blonde haired and blue eyed), I found the mythical phone. Wheezing, an extended cough greeted me.

“Hi, my visa expired, I would like to get an extension so that I can leave Russia.”

“I bought a train ticket…”

“….THESE ARE STUPID RULES”

“These are student rules? THESE ARE RUSSIA RULES!”

And he hangs up. And I stand there. And my blood boils. And my eyes well. And I hold it in. And I pick up the phone. It was a red phone, like the emergency phone that Commissioner Gordon would use to contact Batman with. I pick up the phone and I call him back. I have no idea who this man is. I have no idea if he is also having a bad day. He is just following orders. Well…not really, as what he is doing is bribery, but….still. He’s just trying to make a buck.

50 bucks to be exact. 50 bucks for a visa extension. I looked it as 50 bucks for freedom. I am sure many others who do not have freedom would pay way more for it. And he was my only option. He told me that I needed a plane ticket and fast. I was original set to be in Estonia two days ago via bus, but couldn’t find a flight there. Instead, I flew to Tallinn, the capital of Finland. It was a ferry ride away to get back on track.

As I crossed the tarmac, the sun falling behind the outlines of shady watchtowers, I breathe deep for the first time in a few days. A final double peace sign photo op at the top of the stairs, then I duck into the plane. That duck was supposed to be like a Mario duck, leading me to safety. Mario’s not real and nor was my perceived safety. 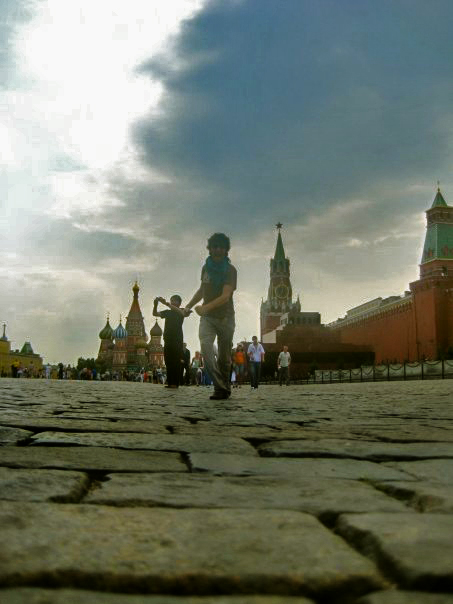